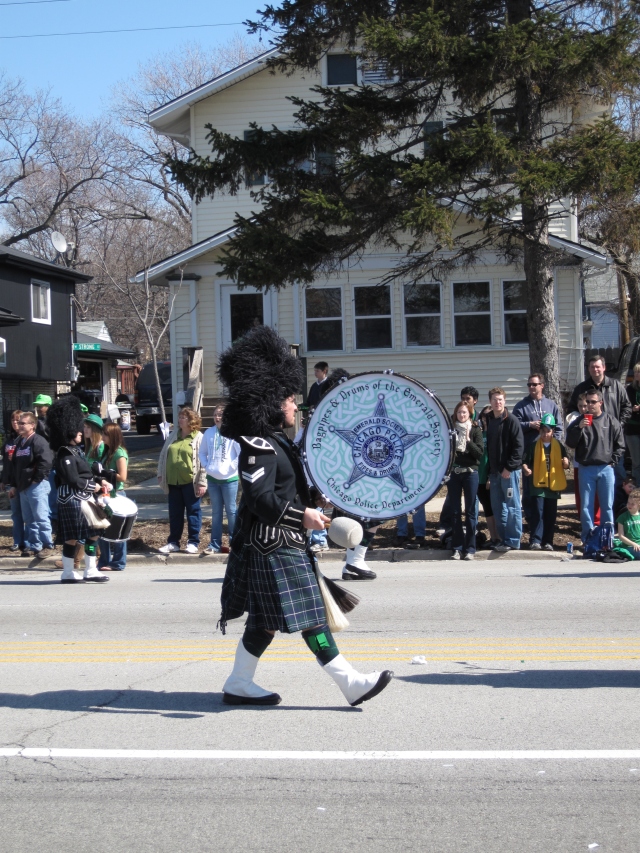 The Emerald Society is an organization of American police officers or fire fighters of Irish heritage. Emerald Societies are found in most major U.S. cities such as New York City, Milwaukee, WI, Jersey City, NJ, District of Columbia, Boston, Chicago, San Francisco, Los Angeles, Minnesota. While the organization is geared toward Irish-American culture, Irish heritage is not listed as a requirement for membership.

This photo was taken of the Emerald Society marching in the Southside Irish Parade. Each year they used to participate in the Chicago Southside Irish Parade, until it was cancelled in 2010. The parade was started in 1979 by the Hendry and Coakley families and eventually became beloved to thousands.  It was cancelled in 2010 due to the strain managing the 300,000+ spectators had on the town resources.

This year the Emerald Society participated in the Northwest Side Irish Parade where they were promenently featured.

For more information on the history of the Southside Irish Parade, click here.

This entry was posted in Amusement, Chicago, Festivals, Holiday, Life. Bookmark the permalink.