Sometimes some of my favorite photos come as a direct result of a terrible stroke of bad luck. One night I was out with my girlfriend and some friends by the Wisconsin border when my girlfriends car broke down. We didn’t end up getting back down to our place until about 4am. By then I had been up for about 24 hours, so I decided to head out and see what kind of shots I could get. I was lucky enough to catch a great shot of the sun rise- and this photo doesn’t do that sunrise justice. As you can see I wasn’t the only one up to catch the spectacular view. There was an older couple out together taking a stroll and taking some photos as well. I was surprised to see how much activity was going on that early- fishermen out fishing, people jogging and riding their bikes. Even in spite of the sleep deprivation, long hours of waiting for the tow truck and the excruciatingly long drive home, being awake to see that sunrise and take that photo made it all worth it. 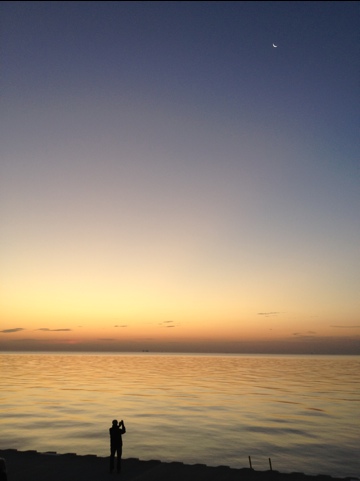 This entry was posted in Chicago, Life, Nature, Weather. Bookmark the permalink.