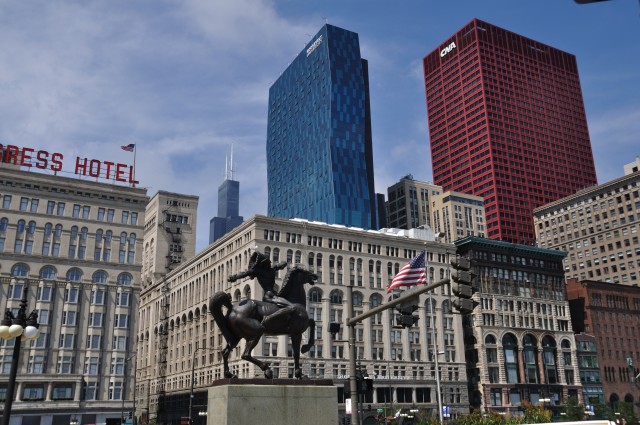 The equestrian Indian on the South side of Congress that is poised to shoot his bow and arrow.

These strong muscular figures on horseback that flank the Congress Plaza provide an idealized portrayal of American Indians. To create the bronze pair, trustees of the Art Institute of Chicago’s B.F. Ferguson Fund commissioned Ivan Mestrovic (1883-1962), an internationally-acclaimed sculptor from Croatia (then part of the Austro-Hungarian Empire). Mestrovic came to Chicago in 1926 when the Art Institute presented an exhibition of his work. Mestrovic cast the pieces in Yugoslavia, and said that though the horses represent those from his home more than the American prairie warriors’, they captured the vitality of Chicago. The equestrian figures are poised to shoot an arrow and throw a spear; however, neither holds a weapon. Although there is a long-held belief that the bow and spear were removed and never returned, this is an urban myth. The sculptor quite consciously omitted these items, leaving the weapons to the imagination of the viewers

This entry was posted in Architecture, Chicago. Bookmark the permalink.