If you guessed the Firehouse located at 228 Illinois in River North, you were right. 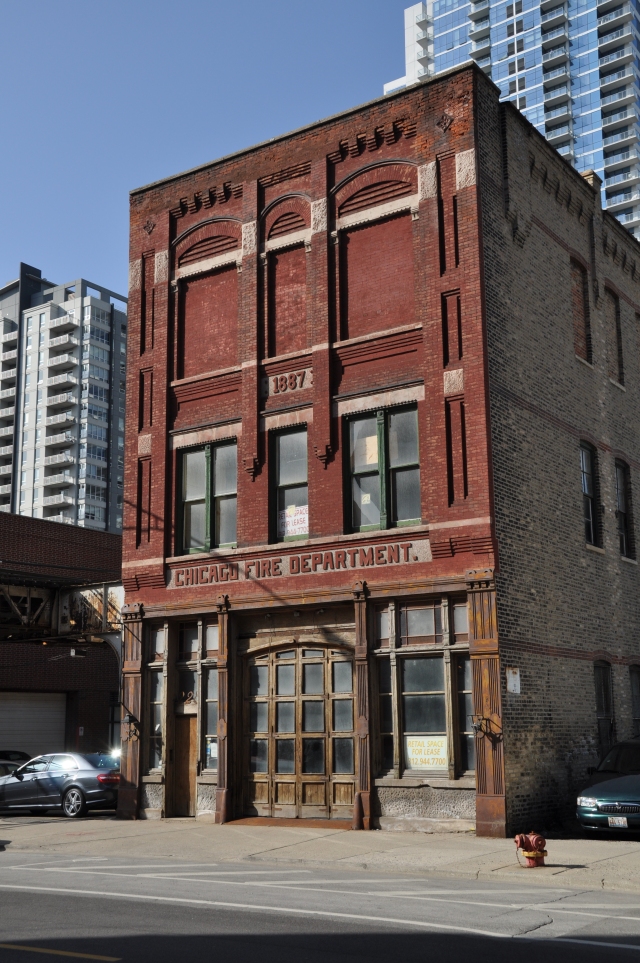 This is 228 W. Illinois Avenue and Franklin Street. The firehouse was built in 1887, and was initially the home of Engine 42- Squad 1- Salvage Squad 1. They ran out of the station for just over 80 years (1887 to 1968). Salvage Squad 1 is no longer in service, but E42 and Squad 1 are very busy companies in the city today. In 1964, Engine 42 had to be relocated to 202 E. Chicago (Eng. 98’s quarters, which was built in 1904) for a short period of time due to a fire in a building next door. Squad 1 was moved to 1044 N. Orleans and called SS1, before it was moved years later to Engine 13 house, 259 N. Columbus where it was again called Squad 1 before moving to 55 W. Illinois. (Squads were additional manpower that carried special tools and responded to all still alarms in their district.) The firehouse was fixed and remained open until November 1, 1968. Engine 42 and Squad 1 were moved to a brand new firehouse at 55 W. Illinois Street, and they are still there today. It’s the largest firehouse in the city. After they moved, “228” became a garage for the Dept. of Streets and Sanitation. The building is now privately owned and currently up for lease.

There are many interesting things about this firehouse.  First off, it is one of the few Chicago firehouses that had three floors.  Second, there are no records of anything else built on the lot that this firehouse lies on.  The lot itself was bought in 1860 (before the Great Chicago Fire of 1871). Many of the Chicago historical people call this building a mystery because they do not know why this lot sat empty for 27 years (1860 to 1887) before the firehouse was built. Finally, one of the things that really draws me to this fire station is that it is one of the last fire stations to use the accordion-style wooden doors.

This entry was posted in Architecture, Chicago, Firehouses, Historic Landmarks. Bookmark the permalink.